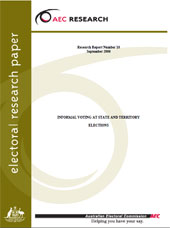 A second paper written by Swinburne University is an abridged form of this paper but also contains some views, which do not necessarily reflect the views of the AEC, a point acknowledged in the Swinburne paper. The Swinburne paper has been forwarded to the 2005 Joint Standing Committee on Electoral Matters (JSCEM).

Enquiries can be made by email to the Research Section of the AEC via an online enquiry or by calling (02) 6271 4411.